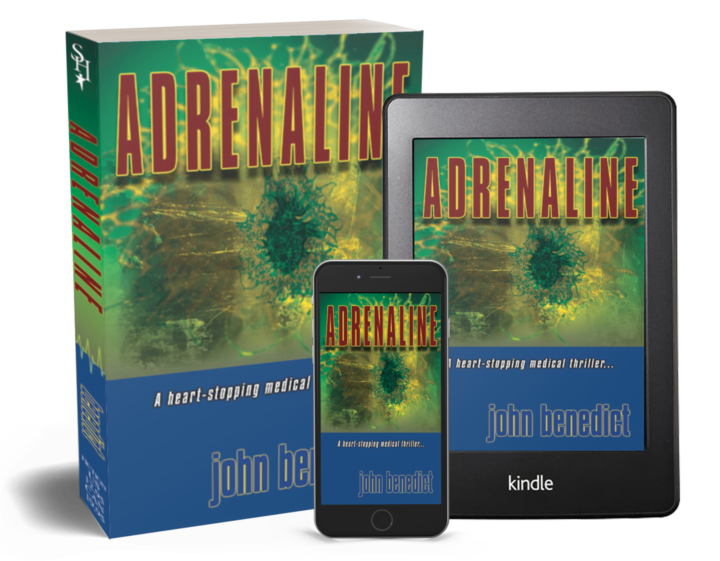 “Readers will feel an adrenaline surge throughout Dr. Benedict’s twisting and at times shocking hospital suspense.”

“A series of mishaps and an accidental death at a Pennsylvania hospital raise suspicions of sabotage in the author’s debut medical thriller. Benedict’s novel is a mystery story rife with suspense. Twists and turns abound as the story progresses, and they hit a crescendo in a scene of utter ferocity that’s violent and intense.”

“If you like gripping drama, starkly effective description and almost unbearable suspense, then this book is for you.

The characters and places are engagingly real.  It has been suggested by readers that this book would lend itself to an engrossing film.

Throughout intertwining subplots, significant hints are provided to the reader—including one startling revelation.  The ending is breathless.  I found myself totally unprepared for the plot twists, even though they had been amply prefigured.  The rhapsodic tone of lovely inner reflection of love and its beauty when juxtaposed with the ugliness of killing is particularly welcome.

I hope that many will read Adrenaline.  Without question, it will jolt you to some interesting insights.”

“This guy can flat out write. Benedict has a great grasp of the many ways language can be used in telling a story, paired with the skill to do it, which is the thing that makes him stand out…  Add in a good feel for the basics of pacing the story and sentence structures, a superb eye for the role of detail, and the priceless ability to draw a reader in until they forget that they're actually reading the story they’re in the middle of.”

Doctors are often labeled with having God complexes. Sitting upon the pedestal in which the public has placed them, it is easy to believe the supreme beings, adorned in their white coats, pick and choose who lives or dies...but what happens if it is true?

Doug Landry, a young anesthesiologist, finds himself asking this very question. When a string of patients start dying by extraordinary, `accidental' circumstances, Doug is forced to investigate the very colleagues with whom he works everyday. He must determine whether the Grim Reaper is frequenting Mercy Hospital by chance, or is he being continually summoned?

Properly entitled, Adrenaline is a thrill ride from the opening chapter. Dr. John Benedict has written a novel encompassing the intrigue of Michael Crichton's "E.R." combined with the thrill of "Crime Scene Investigations." More than this, however, John Benedict takes the reader into the life and mind of a doctor. Though some doctors may have God complexes, with these complexes come an awesome sense of responsibility for the lives that are in their care.

In Chapter 8 of Adrenaline, Benedict writes, "Mike realized that all doctors must face this crossroads at some point in their careers. If they detach too much from their patient's pain, they become heartless bastards with no sense of caring or empathy, no ability to heal the soul, the most important part of their patient. If they don't detach at all, they risk being dashed on the rocks of human suffering." This was a spectacular observation, which I'd never considered before I read this book.

Benedict does a wonderful job in taking his reader into the operating rooms, the conference rooms, the locker rooms and even in the privacy of the doctors' stalls (have to read the book to understand that one). He also takes the reader into the political realm of doctors, the blame games and the finger pointing.

Adrenaline is a thrill ride from beginning to end. This is a top-notch medical thriller and I hope it is the first of many from Benedict. He could easily become the next Dean Koontz with a medical degree.

Under anesthesia, Mr. Rakovic is prepped for an arthroscopy of his right knee when he unexpectedly develops a lethal heart rhythm. For an hour two excellent anesthesiologist's frantically work to reverse the arrhythmia, as the electrically charged paddles heaved his body off the stainless steel table and filled the room with a pungent odor. Ultimately, their efforts fail and Mrs. Rakovic is given the mournful news.

This powerful entrance will immediately pull readers in and continues from there on out, as a corporate meeting ensues, placing employees of Keystone Anesthesia on edge while Our Lady of Mercy Hospital debates whether to merge with General and somewhere around the corner a possible takeover by Pinnacle Anesthesia looms. Intensely riveting, the action continues to climb and it doesn't take long for patients at Mercy Hospital's operating room to start dying unexpectedly!

Adrenaline is well written and an exceptional medical thriller that gives realistic insight into the lives of medical professionals. Dialogue flows smoothly with excitement, making it quite hard to put the book down.

Benedict has done an outstanding job at creating scenes, as well as characters, using every detail no matter how miniscule to evoke clear images and emotional response from readers, thus allowing us to really care about what happens to these characters.

“Filled with accelerating suspense, author Benedict builds the plot that moves Adrenaline forward with methodical and deliberate subplots and characters, each of which succeed to broaden the mystery and draw the reader deep into the workings of the operating rooms and administrative offices of Mercy Hospital. Characters are pleasantly humanized, his plotting is meticulous, offering a thrilling journey.

Adrenaline offers a new take on the term ‘Medical Thriller’ that offers a breath of fresh air to the meaning of the term.” Want a signed copy of Adrenaline?