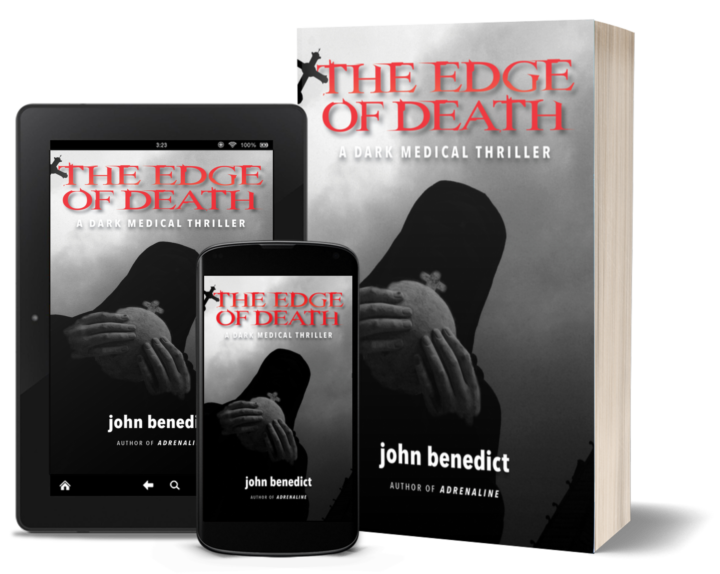 Consciousness crept slowly into Nick Chandler’s brain, fingers of awareness snaking into his mind like shafts of sunlight penetrating the morning haze. Here, in the meadow where he lay, there was no time—or pain. He was content to bask in the warm sun and drink in the mingled scent of freshly mown grass and the heady nectar of honeysuckle. Such peacefulness was beyond his experience.

Voices that seemed miles away hummed lightly about his ears. Or was it just the sound of insects flitting about in the hedgerow? The only other sensation he felt was the rhythmic whoosh of air being forced into his mangled chest.

Thoughts began to coalesce, disturbing ones. Questions queued up for attention, threatening to perforate the fuzzy cocoon of his mind. Where am I? What happened to me? Then a stranger thought, more insistent, jumped the line. Am I dead?

Chandler shooed these thoughts away—he didn’t want to deal with any questions right now. Answers usually brought pain and he preferred the tranquil limbo of his nonexistence. But one question buzzed back, like a pesky horsefly, refusing to be ignored: Was this what it felt like to be dead? He couldn’t be sure—and, he realized, he didn’t care. Deep down, though, he remembered that people were supposed to care about such things.

He sensed that something was different about him, changed somehow, though he couldn’t put his finger on it; the feeling was way too vague. But he knew he was right.

Chandler sighed. Too much work for now—he was bone-tired. Besides, the sunlit meadow beckoned. He let his mind submerge again, bobbing just beneath the surface of consciousness.

An unknowable amount of time passed as Chandler drifted in and out, until the buzzing returned and grew louder, finally nudging him awake. He sensed other people around him, picked up bits of conversation.

Later an older male voice, deep and resonant with a professorial tone, commanded his attention. “Lauren, bring us up to speed on what happened yesterday.”

Chandler struggled to focus and stay awake to hear this part; the meadow would have to wait.

A young female voice, crisp and assertive, answered. “He coded around noontime and we consider it a miracle that we brought him back in the first place. An hour later, though, he arrested again and this time we couldn’t get him back. He was pronounced dead. He was then rushed to PML.”

“I assume you are all familiar with Dr. Mueller’s groundbreaking research into resuscitation science?” the professor said, garnering quiet murmurs of assent. “Go on, Lauren.”

“The patient was immediately placed on full cardiopulmonary bypass. His heart was stopped with a hyper-cool cardioplegic solution, ultra-low oxygen therapy was instituted, and a slew of cerebral protective drugs and antithrombin agents were administered. After twenty-four hours of this treatment, combined with sufficient resting of the myocardium, they attempted to restart his heart. Amazingly, after several countershocks, his heart resumed beating and he was soon transferred here to the ICU. The patient hasn’t regained consciousness, though.”

That certainly answers a lot of questions, thought Chandler. Carol Sue was right about the virus—should’ve listened to her. And now that they mentioned it, he did remember signing some weird form dealing with resuscitation. It was from the Buchanan Med Center Bioethics Committee and was so chock-full of legalese, he hadn’t been able to make heads nor tails of it at the time. But the gist of it was, if any of it came into play, you were basically fucked. And by signing it, you had just helped the hospital install an ironclad covering for their collective butts.

He had been so sick when he was admitted that this particular form and all the others he signed had been a complete blur to him. Except now, he could call to mind clearly the five-page experimental resuscitation protocol that dealt with the Mueller lab. He could page through the sheets in his mind, backward, forward, and zoom into any paragraph for a closer look. He had no idea how this was possible.

The professor spoke again. “So, what is his prognosis at this point?”

Prognosis? The word was delivered with such grave overtones. Again, Chandler fought off a wave of drowsiness.

“The patient is basically terminal and will be lucky to survive the night,” Lauren answered, delivering her clinical assessment with a tasteful touch of sorrow.

Talk about your good news-bad news. He wasn’t dead, but it didn’t sound like he had long to live. Except again, Chandler knew they were wrong, as they’d been about the consciousness part. He couldn’t say how he knew, or why, just that he felt certain. But what was it the perky med student, Lauren, said? She considers it a miracle that I’m still alive. A tiny smile curved his swollen, cracked lips and pulled painfully at the tape holding his endotracheal tube in place. Miracle might not be quite the right word for it, he thought, drifting back down into the narcotic haze of the soft meadow.